Will this Starbucks vending machine replace your barista? 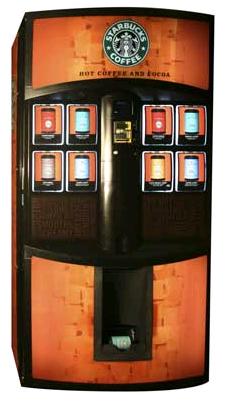 In a move that directly contradicts the Starbucks’ position of putting people before products, the company is reported to be launching vending machines in place of baristas to serve coffee at grocery stores in 8 states.

Starbucks Corp. is experimenting with selling espresso drinks from a vending machine, sans barista.
The company, through its Seattle’s Best Coffee label, has teamed up with Coinstar Inc. and a small Bellevue company, Concordia Coffee Co. Inc., on automated, self-serve espresso kiosks in grocery stores in eight states.

The idea is to “bring coffee to places where you wouldn’t or couldn’t put a full-service espresso bar,” said Tom Ehlers, general manager and vice president of Seattle’s Best Coffee.

The machines, which grind their own beans, crank out lattes, mochas, chai teas, hot chocolates and drip coffees. There are 86 machines installed in Albertsons stores and other groceries in Washington, Oregon, Idaho, Utah, Illinois, Wisconsin, Maryland and Tennessee. The machines take credit and debit cards, cash and coins.

Concordia Coffee, a small Bellevue coffee equipment maker, builds the self-serve kiosks and sells them to Coinstar for just under $40,000 per unit. Coinstar installs them in the groceries and provides maintenance. The kiosks use Seattle’s Best Coffee and are branded with the Seattle’s Best logo.

The self-serve kiosks remove the labor costs of having a barista. Ehlers said customers pay 8 percent to 10 percent less than at a full-service espresso bar. The kiosks are smaller, too, Ehlers said, making them a better fit for grocery stores with space constraints.

“This kind of thing can be plopped in,” he said, “and you can get people on the way in or way out.”

Concordia, a 46-employee company, makes other kinds of automated coffee machines (without the vending machine component) for restaurants, hotels and other locales.

The company is owned by Isett and two other Concordia executives, Ray Ross and Wayne Stearns, along with local investment firm Swiftsure Capital.

Patricia Edwards, a Seattle-based retail analyst for the investment consulting firm of Wentworth, Hauser and Violich, sees self-serve kiosks as part of Starbucks’ overall strategy of creating a greater appreciation for espresso drinks, which in turn generates more traffic for Starbucks stores.
But Edwards said she doesn’t expect Starbucks to affix its own name to the automated kiosks anytime soon. That, she said, would conflict with CEO Howard Schultz’s desire to reinvigorate the coffee-house ambiance of the early Starbucks.

“Howard wants to build the romance of handcrafted espresso beverages,” she said, “and that’s going to be hard to do pushing buttons.”

I recommend a catchy brand name for the Starbucks vending machine experience, perhaps Vendissimo or Place v3.0, in reference to the 3rd place concept. This should not come as much of a shock to anyone since the company switched to superautomatic espresso machines a few years back. It only makes sense to remove employees from the processes and have the customers push the buttons themselves for the full virtual coffee house experience!