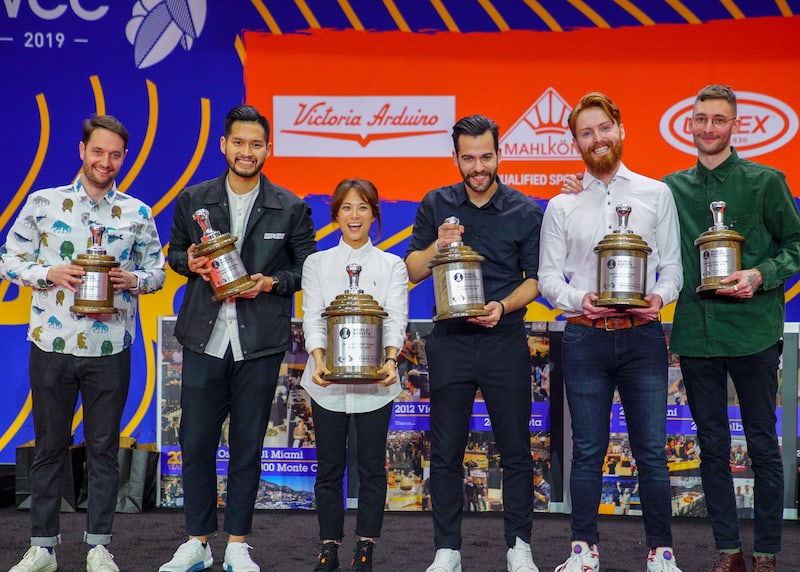 Elite retail coffee professionals around the world participate in annual barista competitions that demonstrate skill, professionalism, ingenuity, and passion for their craft: brewing espresso-coffee drinks. The largest and oldest of these gatherings is the World Barista Championship (WBC), a four-day World Cup-like culmination of tournaments held in sixty-four countries. 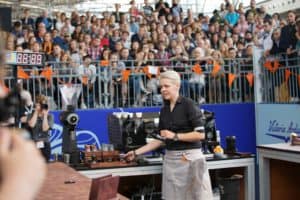 While a clock counts down, spectators cheer through each competitor’s fifteen-minute routine with music carefully selected to set a mood. In that time, they serve four espressos, cappuccinos, and signature coffee drinks to a panel of judges. Each competitor is evaluated on ingenuity, a demonstrated understanding of the product and its origins, technical skill, and of course, the taste.

In addition to a live audience, hundreds of thousands more spectators watch online from around the globe. Video routines of popular competitors are later viewed more than a million times by coffee professionals and consumer enthusiasts alike, transforming baristas and the coffees they use into celebrities.

While brewing, they tell long narratives about the places, cultures, and coffees they represent that demonstrate knowledge and reverence for the place of their coffee’s origin. For underrepresented coffee producers, this is effectively an opportunity to advertise.

The Specialty Coffee Association describes watching WBC routines through the years as an opportunity to “see trends in competition themes and approaches ripple back and forth between the industry and the competitors on stage.” It is an ideal place for producers learn about popular trends in consuming markets, and also provides an outlet to introduce pioneering innovations that create demand. This symbiosis is demonstrated by the rise in popularity of experimental post-harvest processing incorporating yeasts and fermentation, or experimental coffee genetic varieties, like the sought-after “gesha.”

In 2012, Raul Rhodas of Guatemala won the WBC using a dry-natural processed coffee produced strictly for his routine. This ancient method of coffee processing dates back more than 700 years, where ripe cherries are picked and sun-dried two or more weeks without first removing the layers of pulp and flesh surrounding each coffee bean. For the past two centuries, Guatemala and many other countries of Central America, moved away from the practice as being inconsistent during the rainy harvest season, in favor of a newer method called “wet processing.” Rhodas’ winning innovation reflected an industry trend of reinventing disused processing methods to high modern standards, which he did successfully. It later ignited demand for a new high-value category of Guatemalan coffee. One competitor’s innovation can change an industry.

The rules of the World Barista Championship were designed by a volunteer group of industry experts to reinforce best-known practices of customer service and brewing performance in the retail coffee industry, then encourage competitors to innovate higher standards.

Motivated baristas volunteer their own time to participate as a competitor or judge. Doing so demands hours of practice; effectively free skills training for employers that increases employee job performance. Higher standards in coffee production and preparation lead to better quality beverages, increasing consumer demand and the willingness to pay higher prices. Even latte art, a common visual garnish of skilled baristas, can increase the value of coffee perceived by customers. Coffee growers always benefit from increased consumption, and particularly so at higher selling prices.

Brazil is the world’s largest coffee producer, accounting for approximately one-third of all global production. Over the past three decades, government and industry stakeholders coordinated to increase domestic coffee consumption through organized marketing campaigns and programs, including a robust national barista championship program. Starting with negligible per-capita consumption in the 1980’s, the country is now the world’s second largest consumer of coffee to the United States, creating hundreds of thousands of new retail jobs and opportunities for vertical integration of coffee businesses to capture value from roasting and retailing.

Most coffee-producing nations are economically disadvantaged, with a young population facing limited future career options. The position of barista is an entry-level job accessible to a large number of youth, and a gateway to a career in one of the world’s largest industries. Competitions provide an outlet and opportunity for motivated individuals to, learn, to network with others among the industry, to travel, and to pursue excellence in a craft that can become a rewarding profession. Top performing competitive baristas become ambassadors that motivate others to do the same, widening impact.

Like other elite athletes, barista champions promote a sense of national pride and encourage communication between nations. Pride leads to self-esteem and is an inspiring force for hope and peace, particularly among the world’s poorest countries and those recovering from conflict. The World Barista Championship has the potential to teach and motivate new generations to work collaboratively in pursuit of goals benefiting not only the coffee industry, but all of humanity.

Development of a national barista championship program is among the best investments a coffee producing industry can make in its future. Skepticism by those who see only the pageantry of an obscure food competition in consumer nations is understandable. Only when looking beyond the spectacle of its surface does one see the practical value of these programs from industry promotion, workforce skills development, increased consumption, and youth advocacy.

Barista competitions are not superficial activities, they address the core issues of sustainability facing the coffee industry: economic viability and future leadership. No marketing campaign has the potential return on investment that can come from national participation to join the World Barista Championship: hope and inspiration. That’s why, it makes good economic sense to encourage barista competitions in more coffee-producing countries.