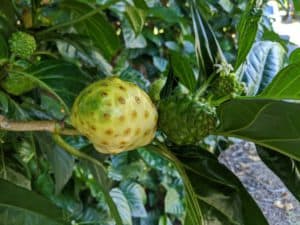 Had you asked me last December what I know about noni, I would have told you they’re a squishy, fermented-smelling yellow or translucent white cone-shaped fruit found mostly around warm coastal areas of Hawaii. They have a bumpy texture and pungent scent like cheese left too long in the sun – stinky grenades I carefully avoid stepping on when walking back to the car from the beach. That was about it. I didn’t even know at the time noni is a cousin of coffee, in the same Rubiacea family. I knew nothing about the noni market.

Lucky for me, my colleagues at PHAMA+, the Pacific Agricultural and Horticultural Market Access Program, approached me in January with a challenge: become a noni market expert. After all, it’s a high-value specialty crop like coffee – there also do not appear to be any other noni market experts. Noni (or nonu as locally known) is a big agricultural industry in tiny Samoa that supports seventeen thousand or more farming households. It’s one of the country’s top agricultural exports and frequently the most valuable single crop. Several other Pacific nation economies rely on it too. The market for noni fruit products, however, is a mystery. I enthusiastically accepted.

Pacific Islanders have consumed the fruit (and used various parts of the tree) as food or medicine for centuries but only started international exports as a commercial product about thirty years ago. Today it’s sold mostly as a health tonic – but there’s very little data available about noni trade and consumption. Beverage and vitamin companies often buy the stuff through networks of dealers and middle men, so information like competitive pricing and trading volumes are opaque. Is the noni market expanding or contracting? What are competitive prices? Who are the suppliers and buyers? Many simple questions remained unknown.

Six months of research later, I delivered a comprehensive noni market study – the first public study of its kind, to my knowledge. There are other good noni academic resources available, some of which were produced in cooperation with the University of Hawaii. Past reports, however, have focused largely on agronomy, chemistry and medicine with little mention of trade, markets or marketing, and consumer applications.

Summarizing my findings, noni is a fascinating tree and fruit with untapped commercial potential. While its health benefits are often misrepresented, noni fruit and juice are no less nutritious than others popular superfruit. In fact, noni is arguably better as sustainable industry when considering its unique biochemistry. The trees are extraordinarily productive and climate change tolerant. I’m now a fan of the funky fruit and see a path forward that can improve the living conditions for tens of thousands of small farming families. I still avoid getting noni fruit on my sandals but you can be sure I’ll also pause for a moment to acknowledge the role this strange tree has played in the history of humanity.