Origin tours are important in the specialty coffee industry so that buyers can travel to growers’ estates and develop productive personal relationships, understand the foreign and complex inner workings of farms and local culture, as well as exchange information and new ideas to help reach quality goals. So why not do it the other way around – a coffee supplier tour?

In June 2011, Soyuz Coffee Roasting invited key direct trade coffee suppliers representing Brazil, El Salvador, India and Indonesia to visit Russia and learn more about the inner workings of its new roasting business, the emerging Russian coffee market and meet the people firsthand that work with their coffees every day. It was the first Soyuz Coffee Roasting Destination Tour.

The tour began on Sunday immediately following the Speciality Coffee Association of Europe’s exhibition in Maastricht, with all participants gathering in Amsterdam for the short flights to SCR’s roasting facility in Kaliningrad, Russia. 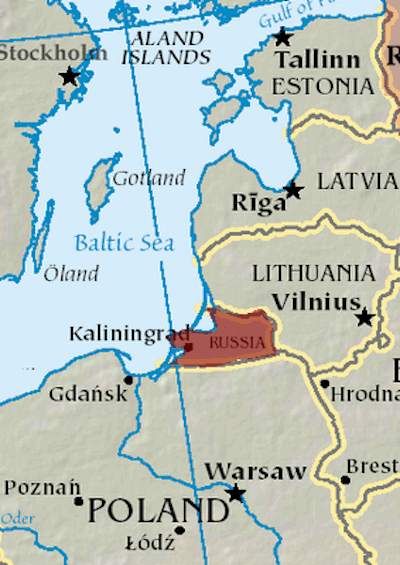 Kaliningrad is a small outcropping of Russia sandwiched between Poland and Lithuania. The territory was annexed from Germany in 1945 and left disconnected from the Russian Mainland after the Soviet Union disbanded in 1991.

This historic seaport town, once home to the proud Soviet Baltic Fleet, has seen an economic boom in recent years due to its strong manufacturing base of electronics, automobile and food companies, a favorable climate (known both as the only nonfreezing Russian Baltic seaport and a popular tourist beach destination) and its convenient proximity to Western Europe. Indeed one finds the culture and style of Kaliningrad feels and looks more European than other Russian cities, something that Moscow hopes will continue flourishing to become the “Hong Kong of Russia.”

Specialty coffee is very new in Russia; still as much instant coffee is consumed nationally as is whole bean or ground “natural” coffee, as it is known domestically. Both trail far behind tea consumption, but market research indicates and casual observation at local grocery stores confirms that consumer interest in coffees of higher quality is growing rapidly.

Day one of our Kaliningrad tour began at the Soyuz Coffee Roasting plant, or “fabrika”. Completed in January 2011, this gleaming all red and white state-of-the-art facility is a testament to entrepreneurial spirit and the shear determination of will to overcome bureaucratic hurdles. Despite the complexities of operating in one of the world’s most challenging business environments, at first sight it is clear that no details were spared in the thoughtful design and construction of Russia’s newest and largest all-specialty coffee roasting business.

The group began by tasting the full range of brands and blends produced by SCR both as espresso and cappuccinos prepared by chief roastmaster and plant director Asli Yaman. Soyuz sells coffee to the major metropolitan markets of Russia under three brand names, Mon Ami and Paretto, which are designed to be consumer “in-home” specialty coffee blends and Barista, which is available in both consumer outlets and through professional business to business (HORECA) distribution. 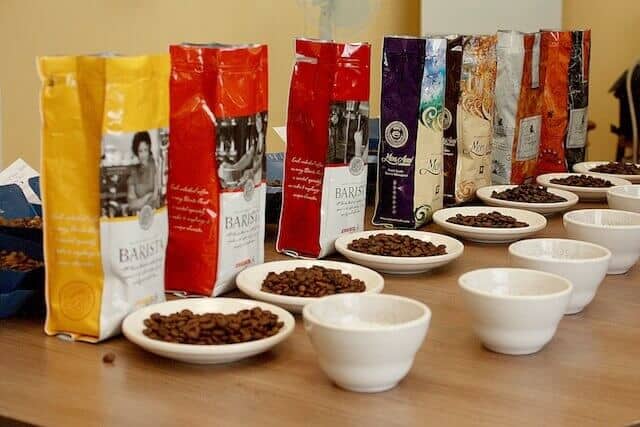 Each SCR brand family has a distinctly unique flavor profile catering to differing taste preferences and forms of extraction: Mon Ami features light and citrusy coffees from Central America, Paretto, heavier syrupy coffees from Indonesia and Barista, clean and sweet coffees from Brazil that are accentuated by spicy, creamy, silky or berry-like characteristics found in the coffees of India and East Africa.

The majority of in-home coffee consumed in Russia is prepared in the Turkish style, where coffees are pulverized into fine powder and then brought to boiling temperature in three cycles with the addition of spices and sugar. Most Russian out-of-home consumption is in coffee shops or restaurants serving espresso, with a preference for milky cappuccinos; there is little or no filter coffee to be found, making the introduction of small lot single origin coffees (known as “monosorts” in Russia) into the consumer marketplace premature. 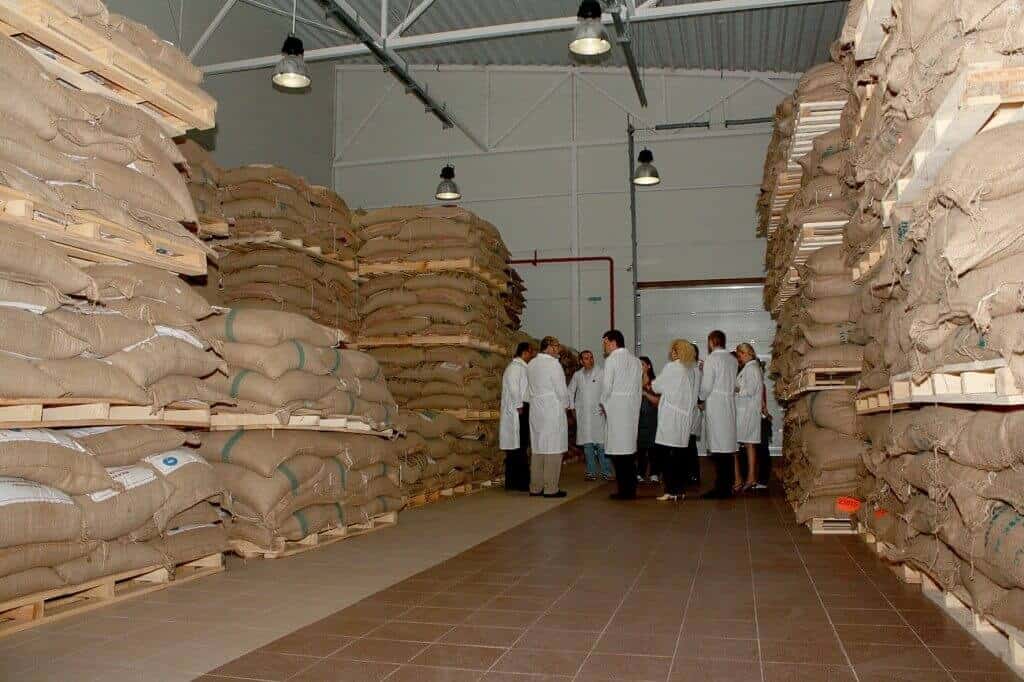 Next came the plant tour. Donning handsome white laboratory coats, the group toured the facility step-by-step from the point where green coffee enters the SCR warehouse through green storage, roasting, post-roast blending, packaging, quality control and the finished goods area. Photo opportunities were ample as producers posed with their coffees in the warehouse and with SCR personnel to share with others back home. 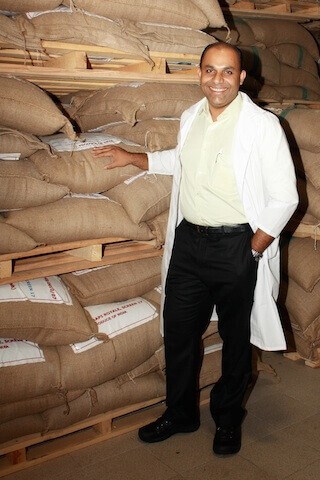 Discussions after lunch drifted casually and comfortably from market potential in Russia, to blending, roasting, marketing and quality philosophies for the remainder of the afternoon, carrying on through dinner and late into the evening. 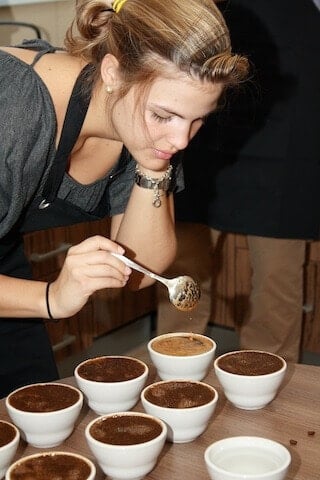 Day two began back at the quality control laboratory where the coffee suppliers were led through multiple flights of cupping that included all of SCR’s packaged blends and each of the individual coffees that combine to create their signature flavor profiles. In a key exercise, the group’s producers tasted their own coffees roasted independently and blended in the commercial products where they are used. Demonstrating the role played by each coffee in its finished product was a main goal of the excursion, which fostered discussions that will further improve future collaboration between farmer and roaster.

After the morning cupping sessions the information exchange continued with presentations prepared by representatives of each origin including photos and videos from their farms and towns so that the employees of Soyuz can better understand what makes each estate special and unique. Generous invitations were made by each of the producers for Soyuz’s personnel to reciprocate and visit during the next harvest season, which were enthusiastically accepted. 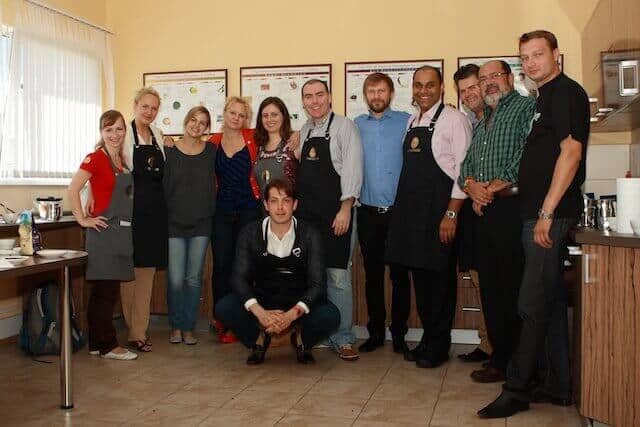 In celebration of the event’s success, we continued to a seaside resort for a late lunch followed by a casual stroll around the city’s central Victory Plaza, visiting a handful of the new coffee shop chains that have emerged in recent years.
As everyone sipped espressos in a busy café under the late night glowing twilight of summer in the Baltic, it became clear that this was far from the end of our journey in Russia; this is just the beginning.